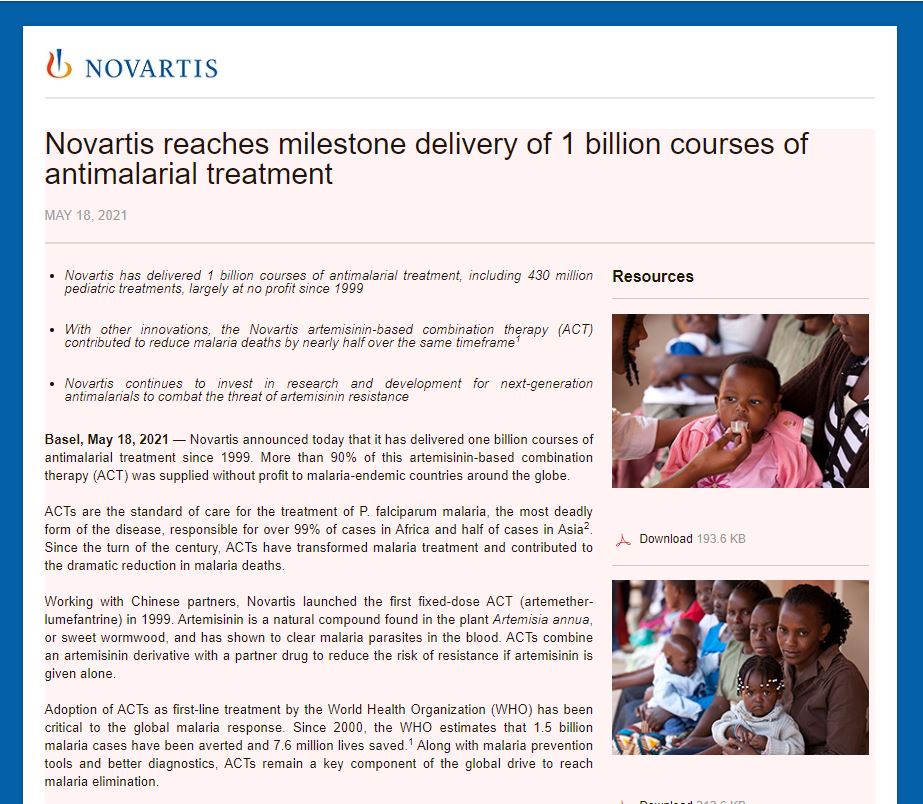 Basel, May 18, 2021 — Novartis announced today that it has delivered one billion courses of antimalarial treatment since 1999. More than 90% of this artemisinin-based combination therapy (ACT) was supplied without profit to malaria-endemic countries around the globe.

ACTs are the standard of care for the treatment of P. falciparum malaria, the most deadly form of the disease, responsible for over 99% of cases in Africa and half of cases in Asia2. Since the turn of the century, ACTs have transformed malaria treatment and contributed to the dramatic reduction in malaria deaths.

Working with Chinese partners, Novartis launched the first fixed-dose ACT (artemether-lumefantrine) in 1999. Artemisinin is a natural compound found in the plant Artemisia annua, or sweet wormwood, and has shown to clear malaria parasites in the blood. ACTs combine an artemisinin derivative with a partner drug to reduce the risk of resistance if artemisinin is given alone.

Adoption of ACTs as first-line treatment by the World Health Organization (WHO) has been critical to the global malaria response. Since 2000, the WHO estimates that 1.5 billion malaria cases have been averted and 7.6 million lives saved.1 Along with malaria prevention tools and better diagnostics, ACTs remain a key component of the global drive to reach malaria elimination.

In 2001, two years after the launch of its ACT, Novartis signed an agreement with the WHO, committing to make the antimalarial available without profit to the public sector of malaria-endemic countries. Although the agreement expired in 2011, Novartis continues to provide treatments on the same terms as before.

“This is a landmark moment in the fight against malaria. Over the last 20 years, Novartis has delivered one billion treatments in more than 70 countries,” said Dr. Lutz Hegemann, Group Head, Corporate Affairs and Global Health, Novartis. “We could not have achieved this milestone without the support of our global partners and those we work with on the ground in endemic countries.”

Children bear a significant burden of malaria disease and death. This led Novartis and Medicines for Malaria Venture (MMV) to partner on the development of the first dispersible ACT formulated specifically for children. Of the 1 billion treatments delivered, more than 430 million are the pediatric formulation launched in 2009. This pediatric treatment has contributed to a significant reduction in malaria deaths in children: in 2010, a child died every 30 seconds from malaria and now it is estimated that a child dies every two minutes. Although this is a massive improvement, there is still a long way to go.

Novartis continues to spearhead the use of ACTs to treat malaria. The company is now testing a new ACT formulation for infants weighing less than five kilograms in collaboration with the PAMAfrica research consortium led by MMV. This is one of the most vulnerable groups affected by malaria, for whom there is currently no approved treatment.

Over the last few years, worrying signs have been observed of emerging drug resistance to ACTs in South East Asia, and more recently in Africa. If widespread resistance to ACTs occurs, particularly in Africa, new effective treatments will be urgently needed. In 2018, Novartis committed to invest more than USD 100 million over five years to further advance research and development of next-generation treatments.

KAF156 (ganaplacide) belongs to a novel class of antimalarial compounds that act against both the blood and liver stages of the parasite's lifecycle. It demonstrated activity against both P. vivax and P. falciparum malaria, including artemisinin-resistant parasites. Novartis leads the development of this compound with scientific and financial support from MMV and from EDCTP via the WANECAM2 Consortium.

KAE609 (cipargamin) is another novel antimalarial compound demonstrating rapid clearance of parasites pre-clinically and in patients. Novartis is leading the development of KAE609 with financial support from the Wellcome Trust and in collaboration with the PAMAFRICA Consortium supported by EDCTP and led by MMV.

In 2020, the company discovered another novel malaria compound, INE963, which has an entirely new mechanism of action which will begin clinical trials in 2021. INE963 is a fast-acting, long-lasting antimalarial which holds promise for a high barrier to resistance. It was discovered with support from MMV and received the organization’s “Project of the Year” award in 2020.

Disclaimer
This media update contains forward-looking statements within the meaning of the United States Private Securities Litigation Reform Act of 1995. Forward-looking statements can generally be identified by words such as “potential,” “can,” “will,” “plan,” “may,” “could,” “would,” “expect,” “anticipate,” “look forward,” “believe,” “committed,” “investigational,” “pipeline,” “launch,” or similar terms, or by express or implied discussions regarding potential marketing approvals, new indications or labeling for the investigational or approved products described in this media update, or regarding potential future revenues from such products. You should not place undue reliance on these statements. Such forward-looking statements are based on our current beliefs and expectations regarding future events, and are subject to significant known and unknown risks and uncertainties. Should one or more of these risks or uncertainties materialize, or should underlying assumptions prove incorrect, actual results may vary materially from those set forth in the forward-looking statements. There can be no guarantee that the investigational or approved products described in this media update will be submitted or approved for sale or for any additional indications or labeling in any market, or at any particular time. Nor can there be any guarantee that such products will be commercially successful in the future. In particular, our expectations regarding such products could be affected by, among other things, the uncertainties inherent in research and development, including clinical trial results and additional analysis of existing clinical data; regulatory actions or delays or government regulation generally; global trends toward health care cost containment, including government, payor and general public pricing and reimbursement pressures and requirements for increased pricing transparency; our ability to obtain or maintain proprietary intellectual property protection; the particular prescribing preferences of physicians and patients; general political, economic and business conditions, including the effects of and efforts to mitigate pandemic diseases such as COVID-19; safety, quality, data integrity or manufacturing issues; potential or actual data security and data privacy breaches, or disruptions of our information technology systems, and other risks and factors referred to in Novartis AG’s current Form 20-F on file with the US Securities and Exchange Commission. Novartis is providing the information in this media update as of this date and does not undertake any obligation to update any forward-looking statements contained in this media update as a result of new information, future events or otherwise.

About Novartis
Novartis is reimagining medicine to improve and extend people’s lives. As a leading global medicines company, we use innovative science and digital technologies to create transformative treatments in areas of great medical need. In our quest to find new medicines, we consistently rank among the world’s top companies investing in research and development. Novartis products reach nearly 800 million people globally and we are finding innovative ways to expand access to our latest treatments. About 110,000 people of more than 140 nationalities work at Novartis around the world. Find out more at https://www.novartis.com