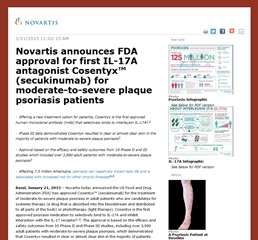 Basel, January 21, 2015 - Novartis today announced the US Food and Drug Administration (FDA) has approved Cosentyx(TM) (secukinumab) for the treatment of moderate-to-severe plaque psoriasis in adult patients who are candidates for systemic therapy (a drug that is absorbed into the bloodstream and distributed to all parts of the body) or phototherapy (light therapy). Cosentyx is the first approved psoriasis medication to selectively bind to IL-17A and inhibit interaction with the IL-17 receptor[1],[2]. The approval is based on the efficacy and safety outcomes from 10 Phase II and Phase III studies, including over 3,990 adult patients with moderate-to-severe plaque psoriasis, which demonstrated that Cosentyx resulted in clear or almost clear skin in the majority of patients and had an acceptable safety profile[3].

"The FDA's approval of Cosentyx signifies a turning point for psoriasis patients, who can now benefit from the first and only approved treatment targeting the IL-17 pathway, which is proven to play a key role in the development of plaque psoriasis," said David Epstein, Division Head, Novartis Pharmaceuticals. "This important milestone will now allow patients to receive a treatment that has the proven ability to offer clear or almost clear skin."

The FDA approval follows the unanimous vote by the FDA Advisory Committee in October 2014. Additionally, in January 2015, the European Commission (EC) approved Cosentyx as a first-line systemic treatment of moderate-to-severe plaque psoriasis in adults who are candidates for systemic therapy.

Affecting 7.5 million Americans and more than 125 million people worldwide[4]-[6], psoriasis is a chronic immune-mediated disease characterized by thick and extensive skin lesions (plaques), which can cause itching, scaling, and pain and may negatively impact daily life[7]-[9]. Nearly 35% of psoriasis patients suffer from moderate-to-severe plaque psoriasis[10]. Research shows IL-17A plays an important role in driving the body's immune response in disorders such as moderate-to-severe plaque psoriasis[11]-[13]. Cosentyx selectively binds to IL-17A, inhibiting its activity[1],[2].

The Phase III clinical program included four placebo-controlled studies which examined Cosentyx 300 mg and 150 mg in patients with moderate-to-severe plaque psoriasis[3]. In these studies, Cosentyx met all primary and key secondary endpoints, including Psoriasis Area and Severity Index (PASI) 75 and 90 and Investigator's Global Assessment modified 2011 (IGA) 0/1 responses, showing significant skin clearance at Week 12[3]. PASI measures the redness, scaling and thickness of psoriatic plaques, and the extent of involvement in each region of the body. Treatment efficacy is assessed by the reduction of the score from baseline (i.e. a 75% reduction is known as PASI 75 and a 90% reduction is known as PASI 90). PASI 90 is a higher standard of skin clearance compared to PASI 75[3].

About PsoriasisAffecting 7.5 million Americans and more than 125 million people worldwide[4]-[6], psoriasis is a chronic immune-mediated disease characterized by thick and extensive skin lesions (plaques), which can cause itching, scaling, and pain[7]-[9]. Patients reported these symptoms can negatively impact their quality of life, both psychosocially and physically, which makes daily functioning difficult[4]. Additionally, patients with psoriasis are at increased risk for other chronic illnesses[4],[5].

About Cosentyx Clinical Trial ProgramThe approval of Cosentyx is based on the safety and efficacy outcomes from 10 Phase II and Phase III studies which included over 3,990 patients with moderate-to-severe plaque psoriasis[3]. This included the four pivotal Phase III trials - ERASURE, FIXTURE, FEATURE and JUNCTURE[14].

In the Phase III program for Cosentyx (300 mg), the overall safety profile of Cosentyx was favorable, with minimal differences seen between etanercept and ustekinumab in head-to-head comparison[14],[15].

About Cosentyx (secukinumab) Cosentyx (secukinumab, previously known as AIN457) is a human monoclonal antibody (mAb) that selectively binds to and inhibits interleukin-17A (IL-17A)[1],[2].  It is the first IL-17A inhibitor approved by the FDA for the treatment of moderate-to-severe plaque psoriasis in adult patients who are candidates for systemic therapy (a drug that is absorbed into the bloodstream and distributed to all parts of the body) or phototherapy (light therapy).

In addition to psoriasis, Cosentyx is also in clinical trials for the treatment of PsA and ankylosing spondylitis (AS). Global regulatory applications for secukinumab in AS and PsA are planned for 2015.

DisclaimerThe foregoing release contains forward-looking statements that can be identified by words such as "can," "recommended," "groundbreaking," "may," "will," "goal," "anticipated," "recommendation," "investigational," "ongoing," "planned," or similar terms, or by express or implied discussions regarding potential marketing authorizations for Cosentyx, or regarding potential future revenues from Cosentyx. You should not place undue reliance on these statements. Such forward-looking statements are based on the current beliefs and expectations of management regarding future events, and are subject to significant known and unknown risks and uncertainties. Should one or more of these risks or uncertainties materialize, or should underlying assumptions prove incorrect, actual results may vary materially from those set forth in the forward-looking statements. There can be no guarantee that Cosentyx will be submitted for sale in any additional markets, or approved for any indication, or at any particular time. Nor can there be any guarantee that Cosentyx will receive regulatory approval or be commercially successful in the future. In particular, management's expectations regarding Cosentyx could be affected by, among other things, the uncertainties inherent in research and development, including unexpected clinical trial results and additional analysis of existing clinical data; unexpected regulatory actions or delays or government regulation generally; the company's ability to obtain or maintain proprietary intellectual property protection; general economic and industry conditions; global trends toward health care cost containment, including ongoing pricing pressures; unexpected manufacturing issues, and other risks and factors referred to in Novartis AG's current Form 20-F on file with the US Securities and Exchange Commission. Novartis is providing the information in this press release as of this date and does not undertake any obligation to update any forward-looking statements contained in this press release as a result of new information, future events or otherwise.