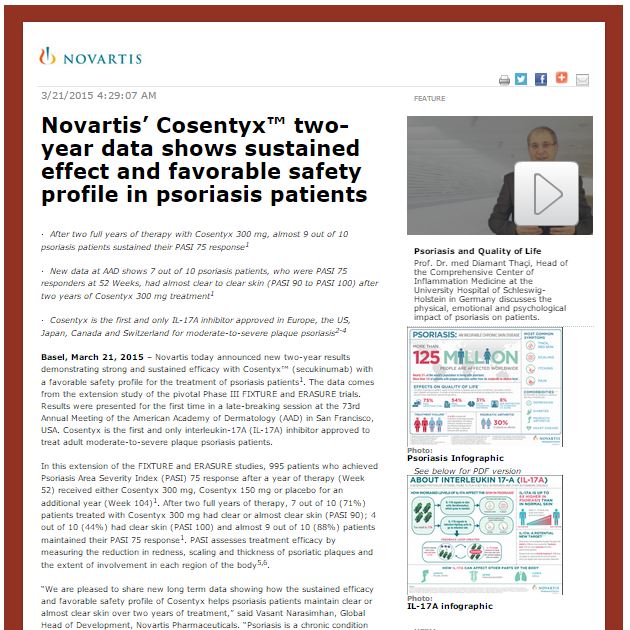 Basel, March 21, 2015 - Novartis today announced new two-year results demonstrating strong and sustained efficacy with Cosentyx(TM) (secukinumab) with a favorable safety profile for the treatment of psoriasis patients[1]. The data comes from the extension study of the pivotal Phase III FIXTURE and ERASURE trials. Results were presented for the first time in a late-breaking session at the 73rd Annual Meeting of the American Academy of Dermatology (AAD) in San Francisco, USA. Cosentyx is the first and only interleukin-17A (IL-17A) inhibitor approved to treat adult moderate-to-severe plaque psoriasis patients.

In this extension of the FIXTURE and ERASURE studies, 995 patients who achieved Psoriasis Area Severity Index (PASI) 75 response after a year of therapy (Week 52) received either Cosentyx 300 mg, Cosentyx 150 mg or placebo for an additional year (Week 104)[1]. After two full years of therapy, 7 out of 10 (71%) patients treated with Cosentyx 300 mg had clear or almost clear skin (PASI 90); 4 out of 10 (44%) had clear skin (PASI 100) and almost 9 out of 10 (88%) patients maintained their PASI 75 response[1]. PASI assesses treatment efficacy by measuring the reduction in redness, scaling and thickness of psoriatic plaques and the extent of involvement in each region of the body[5],[6].

In the study, 70% of patients who initially received placebo and were switched to receive Cosentyx 300 mg after losing treatment response, were able to achieve PASI 90 within 12 weeks of starting Cosentyx treatment[1]. The safety profile of Cosentyx was favorable and consistent with previously reported Phase III clinical trials. No new or unexpected safety findings were identified during the two year extension[1]. The most common adverse were nasopharyngitis, upper respiratory tract infection, hypertension, headache and arthralgia.

About the FIXTURE and ERASURE studiesFIXTURE (the Full year Investigative eXamination of secukinumab vs. eTanercept Using 2 dosing Regimens to determine Efficacy in psoriasis) and ERASURE (Efficacy of Response And Safety of two fixed secUkinumab REgimens in psoriasis) are part of one  of the largest Phase III program in moderate-to-severe plaque psoriasis completed to date, which involved more than 3,300 patients in over 35 countries[7].

Cosentyx is also in Phase III development for PsA and ankylosing spondylitis (AS); global regulatory applications are planned for 2015.

About psoriasis Psoriasis is a chronic immune-mediated disease characterized by thick and extensive skin lesions, called plaques, known to cause itching, scaling and pain; it is associated with significant impairment of physical and psychological quality of life[14],[15],[16]. Psoriasis affects up to 3% of the world's population, or more than 125 million people[17].

This common and distressing condition is not simply a cosmetic problem - even people with very mild symptoms are affected everyday[2]. According to an analysis of surveys conducted of 5,600 patients by the National Psoriasis Foundation (NPF) between 2003 and 2011, 52% of patients with mild, moderate and severe psoriasis were dissatisfied with their disease management[18]. Of the patients surveyed, some were receiving no treatment (9.4-49.2%) or were undertreated (10.2-55.5%)[18].

DisclaimerThe foregoing release contains forward-looking statements that can be identified by words such as "investigational," "planned," or similar terms, or by express or implied discussions regarding potential additional marketing authorizations for Cosentyx, or regarding potential future revenues from Cosentyx. You should not place undue reliance on these statements. Such forward-looking statements are based on the current beliefs and expectations of management regarding future events, and are subject to significant known and unknown risks and uncertainties. Should one or more of these risks or uncertainties materialize, or should underlying assumptions prove incorrect, actual results may vary materially from those set forth in the forward-looking statements. There can be no guarantee that Cosentyx will be submitted for sale in any additional markets, or approved for any additional indications, or at any particular time. Nor can there be any guarantee that Cosentyx will be commercially successful in the future. In particular, management's expectations regarding Cosentyx could be affected by, among other things, the uncertainties inherent in research and development, including unexpected clinical trial results and additional analysis of existing clinical data; unexpected regulatory actions or delays or government regulation generally; the company's ability to obtain or maintain proprietary intellectual property protection; general economic and industry conditions; global trends toward health care cost containment, including ongoing pricing pressures; unexpected manufacturing issues, and other risks and factors referred to in Novartis AG's current Form 20-F on file with the US Securities and Exchange Commission. Novartis is providing the information in this press release as of this date and does not undertake any obligation to update any forward-looking statements contained in this press release as a result of new information, future events or otherwise.

About NovartisNovartis provides innovative healthcare solutions that address the evolving needs of patients and societies. Headquartered in Basel, Switzerland, Novartis offers a diversified portfolio to best meet these needs: innovative medicines, eye care and cost-saving generic pharmaceuticals. Novartis is the only global company with leading positions in these areas. In 2014, the Group achieved net sales of USD 58 billion, while R&D throughout the Group amounted to approximately USD 9.9 billion (USD 9.6 billion excluding impairment and amortization charges). As of December 31, 2014 Novartis Group companies employed approximately 133,000 full-time-equivalent associates. Novartis products are available in more than 180 countries around the world. For more information, please visit http://www.novartis.com.

*Enbrel® is a registered trademark of Amgen Inc. Enbrel used in the FIXTURE study was European sourced.